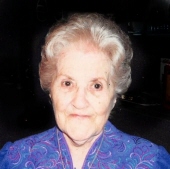 Louise P. Votto, age 90, of West Haven, passed away on Tuesday, February 10, 2015. She was the wife of the late John J. Votto. Born in Webster, MA on December 16, 1924, she was the daughter of the late Henry and Florence Bousquet Parent. She is survived by her son, Bruce Kerrick, of West Haven. Louise was a proud US Veteran, having served in the Army during WWII. She had worked as a nightclub singer for many years. She was a member of St. John Vianney Church in West Haven, as well as a life member of the American Veterans Post 1 of West Haven, a member of the American Legion Post #71 of West Haven, and a past Commander, Life Member, and Chaplain of the D.A.V. Chapter #18 of West Haven. A memorial mass will be held in St. John Vianney Church on Thursday, February 19 at 11:00 AM. Arrangements under the direction of BEECHER & BENNETT-TAYLOR FUNERAL HOME, 410 Campbell Ave., West Haven.