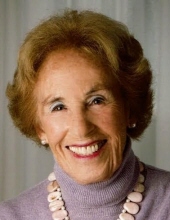 Louise Reichgott Endel, 98, formerly of 15 Vista Rd., North Haven died on April 27, 2020 of the COVID 19 virus. Her husband of 56 years, Charles Endel, predeceased her in 2000. Louise's parents, Henry (Yale '14) and Sadie Reichgott met in New Haven and raised their family of four girls in St. Louis, Missouri where Henry became the 1st Jewish Vice President of Equitable Life Insurance at age twenty-four. They later moved to Mt. Vernon, NY. Louise attended Connecticut College for Women and Tobe-Coburn School for Fashion Careers. Louise and Charlie moved to North Haven, Connecticut with their three daughters in 1952 where both she and Charlie became involved in their community. They were founding members of Ridge Top Club, the 1st swimming club in the area to eschew racial and religious discrimination. Louise's early involvement in the League of Women Voters, Girl Scouts and Ridge Road School's PTA eventually led her to a lifetime of community service in New Haven. In the early 60's she helped organize the Panel of American Women, an organization that addressed racial and religious prejudice with audiences. Louise travelled across the country for twenty-five years to help organize and serve on local panels. Louise described herself as a 'people-holic.' She was New Haven's 'matchmaker' specializing in linking and uniting countless talented people. Her reward was the community good that flowed from those connections. Inspired by her three daughters' commitments to the Arts, healthcare, civil rights and politics, she served on fifty-two local, state, and national Boards. She was passionately devoted to her service on many New Haven non-profits, including International Festival of Arts and Ideas, Long Wharf Theatre, Elm Shakespeare, St. Raphael's Hospital Foundation, and L.E.A.P. Louise was devoted to her family and is survived by her three daughters: Susan Kerner (Paul) of New York, NY; Barbara Spinner (David) of Newton, MA; Patricia Endel of Lake Mary, FL; six grandchildren: Andrew (Ali), Jeffrey (Lisa), and David Kerner; Laura Arvidson and Jamie Spinner (Christina), and Sam Skardon (Leslie); and six great grandchildren: Max and Benjamin Kerner, Hannah and Nicky Arvidson, and Charles and Jackson Kerner. At this time of social distancing, the family is inviting Louise's friends and family to record their memories of Louise and thoughts about her legacy. Please send to her daughter Susan (kerners@montclair.edu). A video memorial will be shared and then followed as soon as possible by a gathering in person to remember Louise's extraordinary life. Memorial contributions may be made to Long Wharf Theatre, Elm Shakespeare, L.E.A.P., Mary Wade Home, or to the South Carolina State Senate campaign of Louise's grandson Sam Skardon. Beecher and Bennett Funeral Home is in charge of arrangements.