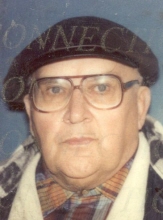 Lucian Mazan passed away peacefully on November 3, 2009 after a long illness while residing at Laurel Woods in East Haven, CT. He was born in New Haven on March 27, 1923 to the late Frank and Helen Tokarz Mazan. Lucian attended Commercial High School. He served honorably in the US Army as a member of the 9th Infantry Division. He was an early graduate of Quinnipiac University then known as the Junior College of Commerce. His major was accounting. Lucian was an avid patron of the arts and was a member of the Provincetown Painters Art Guild as well as a member the Professional and Business Orchestra of New Haven. Lucian was also an enthusiastic sailor and fisherman and sailed as a member of the Bridgeport Yacht Club. Lucian is survived by his brothers Stanley and Raymond Mazan of North Haven, as well as his nieces Pamela Payson of Bradford, NH and Dr. Melissa Mazan of North Grafton, MA and their families. Besides his parents, he was predeceased by his siblings; Paul, Richard, Frederick, Wand, Constance & Patricia Mazan. Private funeral arrangements were in care of Beecher & Bennett Funeral Home, 2300 Whitney Ave., Hamden.