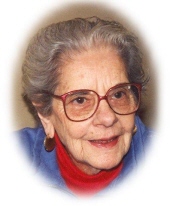 Lucy Schafrick, 94, of South Meriden, entered into eternal rest on March 7th at Meriden Center. Born January 9, 1913 in Middletown, CT, Lucy was one of eleven children. She moved to Meriden in the 1930s, where she was employed by the International Silver Company until her retirement in 1962. Lucy loved animals and children; she donated over one hundred hand made crocheted blankets to local hospitals for medically compromised babies. The family would like to thank the staff of Meriden Center for the care and compassion shown in making Lucy's last days comfortable. Lucy, widow of Arthur, is survived by five siblings; sisters, Jennie Scionti and Lena Gawlak of Middletown, Jean Cuccaro of Meriden, Mary Landeck of California and a brother Arthur Augeri of Middletown; her son, William Schafrick; daughter-in-law, Lois Schafrick; and two grandchildren, Thomas Schafrick and James Schafrick, all of Meriden. Relatives and friends may call at the Beecher & Bennett-Flatow Funeral Home, 48 Cook Ave., Meriden on Saturday March 10, 2007, from 10- 11 a.m.. followed by a brief memorial service. Burial will follow at Gethsemane Cemetery, Bee Street in Meriden. In lieu of flowers, donations may be made to Meriden Humane Society, 311 Murdock Ave Meriden CT 06450.