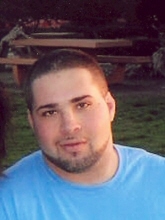 Luis Antonio Rivera Torres 'Tony', 24, passed away at his home in New Britain on September 4, 2010. He was born in Meriden on December 4, 1985 to Luis Rivera of Middletown and Betzaida 'Betsy' Torres of New Britain. Besides his parents, Tony is survived by his step-mother, Jacqueline Santiago-Rivera of Middletown; step-father, Kevin Mercado of East Lyme; maternal grandmother, Ramonita Torres of Meriden; paternal grandparents; Efrain and Grace Rivera of Meriden; siblings, Cheenisa, Richard, and Alexander Rivera all of Middletown and Kassandra Mercado of East Lyme. He was also loved by many aunts, uncles, and cousins. Predeceased by his maternal grandfather, Ruben Torres. Tony grew up in East Lyme where he graduated from East Lyme High School class of '04. A natural athlete, he was on the football team in high school and was also the State Champion for Weight lifting for two years in a row. Most recently he was a student at Tunxis Community College. Besides sports, Tony enjoyed music and cards, especially poker. When he wasn't hanging out with family or friends, his time was spent with his beloved dog, Lourock. A Funeral will take place on Thursday, September 9th at 7 p.m. at BEECHER & BENNETT- FLATOW Funeral Home, 48 Cook Ave., Meriden. Friends may visit with the family earlier in the evening from 4 to 7:00. Burial will be private. In lieu of flowers, contributions in Tony's memory may be sent to National Spinal Cord Injury Association, Conn. Chapter, c/o Gaylord Hospital 400 Farms Rd., Wallingford, CT 06492 sciact.org