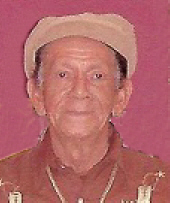 Luis Segundo Galarza, 80, of Meriden, passed away on February 27, 2016. He was born in Ecuador to the late Victorino and Carlota Freile Galarza. He is survived by his loving children Luis Galarza, Mariana Mendez, and Robert Galarza and his wife Tania. He also leaves his grand children Gilberto Hernandez, Luis Galarza III, Wilfredo Mendez, and Tyler and Jesse Galarza. Also three great grandchildren, Jasmin Hernandez, Isaac Galarza, and Tajon Smalls. Luis was a long time Meriden resident having worked mostly for Meriden Manufacturing. He was also a devoted member of All Saints Episcopal Church. Luis enjoyed playing pool with his family and friends, especially at the Meriden Senior Center, and spending time and taking care of his adored cat Lupe. Above all else he loved his family who will all greatly miss his kind and caring spirit. Friends are invited to attend a Memorial Mass in Luis's memory on Sunday March 6, 2016 at 11:30am in All Saints Episcopal Church, 164 Hanover Street Meriden, CT 06451. Burial will be private and at the convenience of the family. Donations in his name may be sent to All Saints Episcopal Church, Meriden.