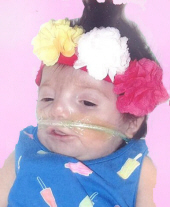 Lydiana Karen Santiago, infant daughter of Jessica Nieves and Ignacio Santiago passed away on Wednesday, April 23, 2014 at Hartford Hospital surrounded by her loving family. She was born January 23, 2014. In addition to her parents she is survived by a brother, Ignacio Romeo Santiago, her grandparents, Rene Nieves of Meriden, Ignacio Santiago and Elba Rivera of Puerto Rico, an uncle, Rene Nieves Jr. of Meriden, an aunt, Yesenia Marie Nieves of Meriden, and many extended family and friends. She was predeceased by her grandmother, Ana Lydia Nieves, and an aunt, Karen Santiago. A funeral service will be held on Tuesday, April 29, 2014 at 10am at Beecher & Bennett-Flatow Funeral Home, 48 Cook Ave., Meriden. Burial will follow at Sacred Heart Cemetery. Relatives and friends may call at the funeral home on Monday, from 5-7pm.