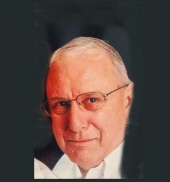 Lyn Henry Cyr, age 74, died peacefully at home on June 9, 2014 with his wife Donna (Holland) Cyr by his side after a courageous and stoic battle with cancer. He was a devoted husband, and beloved father to Catherine (Cathy) Cyr, of Higganum and Elizabeth (Betsy) Stellato and her husband Frank of Wallingford. Lyn was born on October 10, 1939, in St. John, Maine to the late Celina Jalbert Cyr, a professor at the University of Maine Fort Kent, where he graduated from, and also where he met his wife of 47 years. Lyn was a US Air Force Veteran and spent his life working as an engineer. He was an active member of the SCARA Ham Radio Club. His interests included traveling with his wife, doing home improvement projects, photography and making 'his girls' happy. Lyn was famous for a good joke and good advice. In addition to his wife and daughters Lyn is also survived by his brother Leroy (Elizabeth) Cyr. of Surprise, AZ and the apples of his eye were his grandchildren, Patrick (Danielle) Greenberg, Katelyn Munzner, Walter Munzner III, Leif Munzner, Lauren Stellato, and Joelle Stellato. Friends may visit with his family on Thursday, June 12th from 4:00 to 8:00 PM with his Prayer Service beginning at 7:30 PM in BEECHER & BENNETT FUNERAL HOME, 2300 Whitney Ave, Hamden. In lieu of flowers, donations may be sent to the Smilow Cancer Center at Yale New Haven Hospital, www.giveclosertofree.org ,20 York Street, New Haven, CT 06510. W1NRE Over and Out