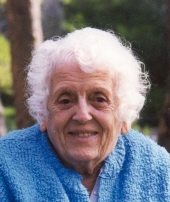 In the Hospital of St. Raphael, Oct. 25, 2009, M. Genevieve 'Jennie' Masto, 98, formerly of New Haven. She was the devoted wife of the late Daniel Masto, Sr. Mother and mother-in-law of Daniel and Linda Masto of Branford and the late Andrew J. Masto. Also survived by her daughter-in-law, Sharon Masto of Venice, FL and her former daughter-in-law, Donna Masto of Milford. Sister of the late A. Thomas Gambardella, Theresa Grimm, Louise Maresca, Anna Candido and James Gambardella. Grandmother of Christopher Masto, Jennifer Masto, Stephen Masto, Jacqueline Vigilante and step-granddaughter Florie Earle and also survived by eight great-grandchildren. Jennie was born in New Haven on Dec. 6, 1910 a daughter of the late Andrea and Immaculata Franco Gambardella. She was a secretary for the Hamden Board of Education for more than 35 years before retiring in 1977. She and her husband traveled extensively throughout the US and Europe. At one time or the other her children, grandchildren, nieces and nephews were 'treated' to vacations. Jennie was very involved as a dedicated campaign worker for many years in New Haven politics. She was also active at the Atwater Senior Citizens Center. Funeral from BEECHER & BENNETT, 2300 Whitney Ave., Hamden on Thursday, Oct. 29th at 9:15 a.m. A Mass of Christian Burial will be celebrated at St. Rose of Lima Church, 115 Blatchley Ave., New Haven at 10:00 a.m. Friends may call at the funeral home on Wednesday from 5 - 8 p.m. Entombment in St. Lawrence Garden Mausoleum. Memorial contributions may be made in Jennie's memory to the Masto Family Scholarship, c/o Amity Charitable Trust, P.O. Box 4129, Yalesville, CT 06492. The family wishes to extend their gratitude to the staff at the Orange Health Care Center for the kindness extended to Jennie.