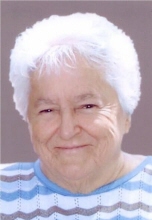 Meriden- Madeline M.(Goslin) Albee , 80, wife of Clinton Albee passed away peacefully after a courageous battle with cancer, at home surrounded by her family on Tuesday, February 28, 2012. She was born August 13, 1931 in Ashland, Maine a daughter of the late Joseph and Angela (Theriault) Goslin. Madeline was an aide at the former Meriden Hospital and later worked for AGC Inc. in South Meriden, retiring several years ago. Madeline was also a member of Holy Angels Church, Meriden. In addition to her husband Clinton she is survived by four daughters and their husbands, Gail Chasse , Robin and Dominic Merola, Tammy Albee and Steven Fortier, and Lisa and Steven Heath all of Meriden, sixteen grandchildren and fourteen great-grandchildren. She was predeceased by three sons, Philip and Gary Chasse and Mark Albee, a daughter, Kim Wrublevski, two grandsons, nine sisters and two brothers. A funeral will be held Friday, March 2, 2012 at 8 a.m. at the Beecher & Bennett-Flatow Funeral Home, 48 Coook Ave., Meriden followed by a mass of Christian burial at 9:00 a.m. at Holy Angels Church, Main St., South Meriden. Burial will follow at Walnut Grove Cemetery. Relatives and friends may call at the funeral home on Thursday, March 1 from 4-8 p.m.