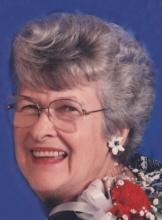 Madelyn R. Bulson, 91 wife of the late Everett W. Bulson and the late John R. Gurnee passed away peacefully surrounded by her family on Monday, Oct. 21, 2013 in Milford Hospital. She is survived by 2 children, 2 step-children, 7 grandchildren, 15 great-grandchildren and 2 great-great-grandchildren. Madelyn was born June 17, 1922 in Nyack, NY daughter of the late Marvin and Julia Hallashe Hall, and was also predeceased by a brother. She was a resident of West Haven for over 40 years, and was employed as a secretary for the City of New Haven for 22 years in the Traffic, Parking and Parks Department. She was a member of the Interservice Club of New Haven which oversees Camp Cedarcrest in Orange. Madelyn was the kindest, sweetest person. Funeral service will be private and under the direction of BEECHER & BENNETT-TAYLOR FUNERAL HOME, 410 Campbell Ave, West Haven.