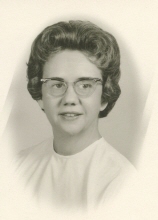 Mae Elizabeth Drickamer (1921 - 2012) Mae Elizabeth (McFillen) Drickamer, age 90, died Thursday January 26, 2012 at New Haven, CT, after suffering a stroke. She was born August 23, 1921 at Elyria, OH, the daughter of Alice (Whitker) McFillen and Charles L. McFillen. She grew up in Toledo, where she received her diploma from Scott High School and then matriculated to the three-year nursing degree program at the University of Michigan at Ann Arbor. She graduated in 1942 as a registered nurse. While at Michigan she met Harry G. Drickamer, an engineering student. They were married at New Orleans, LA on October 28, 1942. Harry was working for Pan American Refining Corp. in Texas during World War II. In the fall of 1945, they returned from Galveston to Ann Arbor, where Harry completed his doctorate. They then moved to the University of Illinois at Urbana-Champaign in 1946 and remained in the twin cities for the remainder of their nearly 60 years of marriage. Harry Drickamer died on May 6, 2002. In 2005, Mae Elizabeth moved to Woodbridge, CT to live with one of her daughters. Mae Elizabeth was a tireless worker and volunteer for Planned Parenthood, beginning in the 1960s and continuing for more than 40 years. She went back to school in the 1970s to obtain certification as a family nurse practitioner. In her roles with Planned Parenthood, as a clinician and as an administrator, Mae Elizabeth traveled throughout Central Illinois, staffing and visiting the various Planned Parenthood clinics. Even after retiring, she spent countless hours assisting with clerical and organizational tasks at the local office. In 2001, she was the first recipient of the Ruth Dobbins Volunteer Service Award from Planned Parenthood of East Central Illinois and in 2005 received their Respecting the Past Award, honoring the many hats she wore for this organization, including President of the Board, Executive Director, and being the first nurse practitioner on the clinic staff. Mae Elizabeth was a volunteer with the office of the Unitarian Universalist Church in Urbana from the years before the two churches merged until she moved to Connecticut. Her major focus was on the UNITER, the church newsletter, but she also devoted great effort to the weekly church program, to clerical tasks, and with various committees and work groups. Further, Mae Elizabeth contributed time and energy to the Memorial Society in Champaign-Urbana, aiding its establishment and development in the region. For more than four decades Mae Elizabeth was a guiding light for the spouses of new graduate students, post-doctoral fellows, and incoming faculty joining the University of Illinois in areas involving chemistry and physics. Her work with these organizations and groups exemplify the spirit of contributing and giving back that is so important to our world. Mae Elizabeth and Harry raised five children, all of whom survive. Lee (Judith Sellers) retired from Northern Arizona University and lives in Myrtle Beach, SC. Lynn (Marylee Dalton) retired from the University of Michigan and lives in Ann Arbor, MI. Kurt (Maureen Taylor) is a faculty member at Imperial College in London, England. Margaret is a medical doctor in geriatrics at Yale University in New Haven, CT. Priscilla (Dean Whittaker) serves on the faculty at Hope College in Holland, MI. Three grandchildren also survive: Jonah R. Coste, Nathan C. Coste, and Adena L. Coste all of Woodbridge, CT. Also surviving is Mae Elizabeth's sister, Jane L. Brown of Churchville, NY. Mae Elizabeth was always an avid reader and she derived great pleasure from art and music, including the many fine concert series on the University of Illinois campus. Everyone who knew Mae Elizabeth appreciated her warmth, wonderful sense of humor, and genuine hospitality. Her love of family and friends was a hallmark of a long, productive life. Memorial contributions can be made either to Planned Parenthood of Illinois or the Unitarian Universalist Church in Urbana.