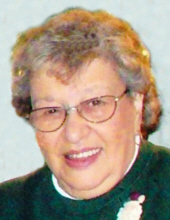 Mae (Philomena) Natlo, 90, passed away at Hartford Hospital on February 8, 2019. Born in Tarrytown, NY on July 16, 1928, she was the daughter of the late Gennaro and Dolorata Licursi Cerce. Mae grew up in North Tarrytown and graduated from North Tarrytown High School, class of '46. She moved to Meriden in 1960 and had lived there since. Mae worked for Home Bank right through the mergers and retired in 1993 from Fleet Bank after 25 years of service. She was a member of the Meriden Intermediates, St. Rose Church, and volunteered for a time at Easter Seals and the CT Baptist Home. Mae had made many friends in CT and kept her friendships strong with her friends in NY. She enjoyed cooking, reading, and word puzzles, and was a fan of both the boys and girls UCONN Basketball teams. Her biggest joy was her family. She often remarked how very blessed she was having her family close by. Mae referred to them as her 'Blue Birds of Happiness.' Mae will be remembered by four sons and their wives, Patrick & Elaine, Jerry & Lisa, Paul & Mary, Mark & Khong; eight grandchildren, Kerry (Ira) Schwartz, Amber (Todd) Snyder, Amanda (Derek) Ciampini, Leanne (Zachary) Inzero, Nicholas (Kristen), Richard (Kristen), Jared (Sonia), and James; step-grandsons, Joshua and Sunray; ten great-grandchildren, Schuyler, Giuliana, Gabriella, Nicholas, Lucas, Giovanni, Luca, Bianca, Alessandra, Alessia, and Adriana; extended step-grandchildren, Chit, Chay, and Scott Khongdy and their families; niece, Marianne (John) Vitale; and nephew, Louis Cerce, Jr., all of NY. She was predeceased by a brother, Louis Cerce, sister-in-law, Antoinette Cerce, and a great-grandson, Jordan Snyder. Friends are invited to visit with her family at BEECHER & BENNETT-FLATOW FUNERAL HOME, 48 Cook Ave., Meriden, on Wednesday, February 13th from 5:00 to 7:00 p.m. A Funeral Service celebrating her life will be held on Thursday morning at 10:00 a.m. in the funeral home, followed by burial in Sacred Heart Cemetery. Contributions in Mae's memory may be sent to St. Jude's Children's Research Hospital, 501 St. Jude Place, Memphis, TN 38105, www.st.jude.org.