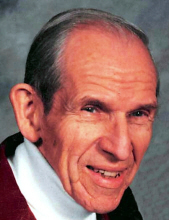 Malcolm D. 'Mal' Goering, age 98, of Branford, passed peacefully at his home on May 23, 2019. He was born in New Haven, a son of the late Frederick J. and Marie (Schultheiss) Goering. Mal is survived by his loving wife of 78 years, Frances M. (VanEgghen) Goering, who herself is 104; his daughters, Cynthia Goldblatt and her husband Louis of Killingworth and Hope Goering-Grossbard and her husband John of Killingworth; his son Albert Markley of Charleston, SC; seven grandchildren, eight great-grandchildren and two great-great-grandchildren. Mal was predeceased by his brothers, Russell and George Goering. Mal was a lifelong member of the Whitneyville United Church of Christ (formerly Whitneyville Congregational Church); where he served as a Deacon, participated on many committees, and sang joyously in the choir. Mal worked for 30 years in the meat processing and distribution business (Sperry & Barnes, Swift & Co., Standard Beef). After retirement he also worked at local funeral homes serving as a pallbearer for many. A lifelong community supporter, Mal helped out the Branford Food Bank, the Litter Committee, and supported the Fire and Police Departments and Shriner's Hospital. He was also active on the Board of Directors of Killam's Point Religious Retreat Center in Branford and President of the State of Maine Society of New Haven. Because of Mal's love of travel, he joined the Friendship Force for 10 years, where he travelled to more than 20 countries. He and Frances vacationed at the Poland Spring Resort in Maine for 46 years where he enjoyed playing golf, his favorite pastime. An avid athlete, Mal competed in State and National Senior Olympic events, winning many medals. He loved singing, performing karaoke, and acting. He performed in local theatre productions as well as the play 'A View from the Bridge' at the Long Wharf Theatre in New Haven. Anyone who knew Mal loved his cheerful, affable, zest-for-life nature.That and his hilarious antics will be missed. Friends are invited to attend his funeral service on Wednesday, May 29th at 10:30 a.m. by going directly to the Whitneyville United Church of Christ, 1253 Whitney Ave, Hamden, CT 06517. Burial will follow in Whitneyville Cemetery. In lieu of flowers, contributions in his memory may be made to VNA Community Healthcare & Hospice, 753 Boston Post Rd, Suite 200, Guilford, CT 06437 or to his church, Whitneyville UCC. Arrangements are in care of Beecher & Bennett Funeral Home.