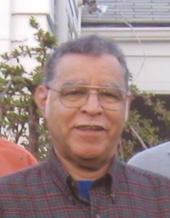 Manuel P. Valeriano, 83, beloved husband for 58 years of Jeannette Valeriano of New Haven, passed away Sept. 11, 2011 after a long illness. He was born in Bridgeport, Dec. 25, 1927, a son of the late Felipe and Aninha DaRose Valeriano and was a lifelong resident of New Haven. Mr. Valeriano served in the US Army during the Korean War, at the rank of Corporal, earning a bronze star and was employed for the Winchester Repeating Arms Co., and later the US Postal Service for 20 years before retirement. In addition to his wife, he is survived by his daughter and her husband, Carol R. and Michael Slade of Fairfield, Mr. Valeriano's son Ricardo Smith of East Haven, a sister Carlota Williams, brothers Silvino, Armondo and Walter 'Pete' Valeriano all of New Haven, his grandchildren, Bianca E. Slade and Michael Ross Slade of Fairfield, and many nieces and nephews. Mr. Valeriano was predeceased by a sister Ruta Valeriano and a brother Daniel Valeriano. Friends and relatives may visit with his family on Friday, Sept. 16 from 10 a.m. to 12 noon at BEECHER & BENNETT, 2300 WHITNEY AVE., HAMDEN. Service of Celebration will begin at 12 p.m. Interment with Military Honors in Beaverdale Memorial Park. Contributions in his memory may be sent to CT Hospice, 100 Double Beach Rd., Branford, CT 06405.