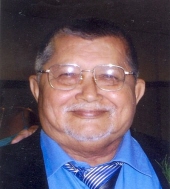 Meriden - Marcelino 'Chelito' Colon, 78, died on Wednesday, November 18, 2009 at home surrounded by his family. He was born January 22, 1931 in Arceibo, Puerto Rico a son of the late Florentino and Maria (Rojas) Colon. He had worked for Perry Rug Company for many years. Chelito loved playing domino's and had won several awards and trophies. He was a member of the Latin American Clubs and the Bocci Club. He is survived by three daughters, Ana Colon of Meriden, Adelina Estrella and her husband Miguel of Meriden and Nancy Morales and her husband Francisco of Puerto Rico, two special nephews, Angel Rojas and his wife Elizabeth of Massachusetts, and Miguel Rojas and his wife Maria of Meriden, a speical niece, Carmen Rojas of New York, fourteen grandchildren and twenty great-grandchildren. He also leaves two best friends, Catalino Valez and Catalina Soriano as well as many more nieces and nepehws. He was predeceased by three sons, Ceferino and Jeffrey Colon and Marcelino Colon Jr, three brothers and a sister. Relatives and friends may call at the Beecher & Bennett-Flatow Funeral Home, 48 Cook Ave., Meriden on Satuday, November 21, 2009 from 6-9pm. A service will be held at 9pm. Burial will be at the convenience of the family. In lieu of flowers donations may be made to Central CT. Dialysis, 377 Research Parkway, Meriden, CT 06450 or to, VITAS, 1579 Straits Turnpike, Middlebury, CT 06762. To send a condolence please see obituary at www.beecherandbennett.com. The family would like to thank Nery Dias and Rosa Rodriguez who took special care of Marcelino for many years, they will be forever grateful