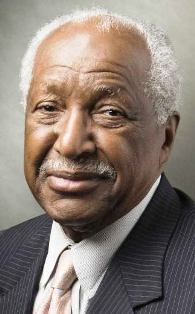 Marcus Rollins McCraven, age 97, died peacefully in the company of his family on Wednesday, May 5, 2021, at his home in Hamden, Connecticut. He was born on December 27, 1923 in Des Moines, Iowa to parents Marcus and Buena McCraven. He married his wife Marguerite Mills, who survives him, in 1947 in Washington D.C. He was predeceased by his brother Carl C. McCraven (Eva).
Marcus was a wonderful family man who embraced spending time with his loved ones. In addition to his wife, Marcus is also survived by his three devoted children: Carol McCraven Ivy (Jonathan Sr.), Stephen McCraven (Clemence), and Paul McCraven (Cynthia). Additionally, he leaves behind his six cherished grandchildren and two great-grandchildren: Makaya McCraven (Nitasha), Kinga McCraven (Dionne), Jonathan Ivy Jr., Victoria McCraven, Alexandra McCraven, Jamil McCraven, Maya McCraven, and Jaya McCraven. He is also survived by his nephew, Carl Bruce McCraven, Agnes Zsigmondi McCraven (mother of Makaya and Kinga) and Jessica Benyayer (mother of Jamil), and many other beloved nephews, nieces, and family friends.
After graduating from high school, Marcus enrolled at Howard University, but was drafted into the U.S. Army during his first year of college. He was listed as an expert rifleman, but he went on to serve as a supply clerk with an engineering regiment in Papua, New Guinea and in the Philippines. Returning to the United States, Marcus continued his studies at Howard University and graduated with his B.S. degree in electrical engineering.
Upon graduation, Marcus was hired at the Naval Research Laboratory in Washington, D.C. Marcus then moved to Lawrence Livermore National Laboratory in California, where he worked on the nuclear defense system. His area of expertise on the project was diagnostics, and he was instrumental to the early development of nuclear weapon testing. He then joined the research staff at the California Lawrence Radiation Laboratory. During this time, he was also appointed to a national commission to study peaceful uses for nuclear energy. In the 1960s, he left California and moved to Connecticut, where he worked for Phelps Dodge. In 1970, he joined United Illuminating Co., where he ultimately retired as Vice President of Environmental Engineering.
Marcus was a dedicated leader within his community. He served on numerous boards, including Quinnipiac University, the American Red Cross, and the Peabody Museum. He was a lifetime member of the NAACP and was a founding member of the Beta Tau Chapter of the Sigma Pi Phi Fraternity. He was awarded honorary doctorates from Quinnipiac University and Albertus Magnus College. He also was an Associate Fellow at Davenport College at Yale University.
Marcus had many interests and hobbies that brought joy to his life. These included gardening, bird watching, and traveling the world with Marguerite. He was an avid golfer and bowler, and he loved doing crossword puzzles. He lived his entire life with integrity, devotion to family, and love for humanity.
Services will be held on Wednesday, May 12th at Dixwell Avenue Congregational Church, 217 Dixwell Ave., New Haven, CT. Services will begin with visitation from 10:30 a.m. to noon, followed by a church service at 1 p.m. and burial at Grove Street Cemetery. Following interment, the family welcomes all to a reception at Orchid Café, 5 Science Park, New Haven. In lieu of flowers, you may send gifts of remembrance to Dixwell Avenue Congregational Church or the Marcus and Marguerite Scholarship Fund, c/o Quinnipiac University. Arrangements are in care of BEECHER & BENNETT FUNERAL HOME, 2300 Whitney Avenue, Hamden.