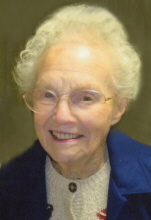 Howland, Margaret M. - Margaret M. Howland, 96, of Orange, CT passed away peacefully on February 20, 2013. Born on August 15, 1916, she was the daughter of the late Harold J. and Margaret Fuller Manchester. She was the wife of the late William M. Howland. She worked for many years as a service representative for SNET in the West Haven office. She also spent many years as a substitute teacher at Amity High School. She is predeceased by her brother, Harold J. Manchester, Jr. She is survived by her son, Kenneth and his wife Mary and many dear friends. Margaret's proudest accomplishment was graduation from Wheaton College, Class of 1937 as a French Major, BA. While there, Margaret was a member of the Wheaton College Synchronized Swim Team, the Tritons. A long-time, dedicated volunteer for Wheaton, Margaret served the College in many roles: Member of the Alumni Board of Directors, 1988- 1991; Club Coordinator, 1988 - 1990; Class President, for over 10 years, 1996 - 2007 and Wheaton Fund Chair from 2000- 2007. Margaret was awarded the Alumnae Achievement Board Award in 1992. This award is presented to an alumna or alumnus who has made a significant contribution to two of three of the following categories: community, career or volunteer service to Wheaton. Margaret had a great amount of love and pride that she shared with her Wheaton classmates and the administration over decades. Margaret has been a devoted graduate of Wheaton in good times and in challenging times. She was exceptionally forward in her thinking and was a true Wheaton gem. Margaret's dedication to Community arose early in her life. Margaret was one of the first recipients of Orange's Living Treasure Awards in 2006. She was chosen for this Award for many reasons. She was devoted to the Orange Scholarship Fund for 17 years. She was a volunteer at the Orange Library since her retirement from SNET. Margaret was a member of the Orange Historical Society. As president of the Milford/Orange American Association of University Women, Margaret helped to provide financial assistance to students. Margaret was also active in the Orange Republican Club, served as Deputy Registrar of Voters for 20 years and was a member of the Community Services Committee on Aging. She traveled throughout the United States and Europe sharing her experiences with family and friends. Her happy spot was a little cottage on Cape Cod where she and 3 friends spent summer days swimming in the pond, shopping at antique stores and playing Scrabble and bridge on the porch. The family would like to thank the dedicated staff of West Haven Apple Rehab and the angels from Hospice who helped to make mom comfortable in her last days. Friends my visit with the family on Friday, March 1, 2013 at BEECHER & BENNETT-TAYLOR, 410 Campbell Ave, West Haven from 4-8 PM. A Memorial Service will take place at 7 PM during the visitation. In lieu of flowers, donations may be made to The Orange Scholarship Fund, P.O. Box 729, Orange, CT 06477 OR Wheaton College, 26 East Main Street, Norton, MA 02766.