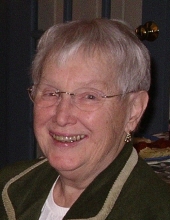 Margaret Olsen Harberg, 91, of Cheshire, wife of the late Frank Harberg passed away on Sunday April 8, 2018 after a brief illness. Mother of Sheryl (Greg) Thomas of Elysburg, PA., Karan (Creighton) Myers of Cheshire, Margit (Jack) Weber of Charleston, RI., and Thomas F. (Leona) Harberg of Hamden. Grandmother of Jamesin Breach, Graham Williams, Kirsten Yagoobian, Emily Morrison, Haley Serafin, great-grandmother of Noah Williams, Easton and Elin Breach, Benjamin and Julia Yagoobian, Gwendolyn Morrison and Morgan Serafin. Margaret was born in New Haven on January 13, 1927 a daughter of the late Jacob and Othelia Olsen. She had resided in Hamden for most of her life. Margaret spent many years volunteering her time at Elim Park which later became her home. Her family would like to thank Ally and the staff at Elim Park along with Hospice for the care they gave their beloved mother. Margaret's funeral service will be on Tuesday April 10, 2018 at 11am at BEECHER & BENNETT, 2300 WHITNEY AVE. HAMDEN. Friends may call from 9-11am. Interment in Beaverdale Memorial Park. Memorial contributions may be sent to The American Heart Association P.O. Box 3049 Syracuse, NY 13220, or to CT Hospice, 100 Double Beach Rd. Branford, CT 06405.