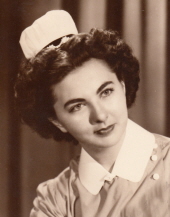 Marguerite Ann Sgro (Yulo), age 88, of Masonicare in Wallingford, passed away peacefully on August 13, 2014. She was the widow of Gene Louis Sgro. Mrs. Sgro, a daughter of the late Ralph and Rose Mona Yulo, was born in New Haven on February 24th, 1926. She was in the US Army Nurse Cadet Corps and graduated Grace Hospital in 1947 as a registered nurse. She worked in all three City of New Haven hospitals. She also worked at the Knights of Columbus for fifteen years in the membership department. She handled public relations for the West Haven Symphony Orchestra and the Spirit Alive Chorale. She was a communicant of St. Paul's Roman Catholic Church. She leaves a brother, Dr. Ralph J. Yulo, and his wife Ruth, of Eastford, CT, and a sister, Mrs. Annette E. (Yulo) Polito, and her husband Robert, of Cheshire. She is also survived by nephews Mark and Fred Sgro. She leaves behind cherished friends Phung and Nen Tran and family. She is predeceased by her brothers; Dr. Frank R. Yulo and Vincent Yulo. The funeral will leave from BEECHER & BENNETT-TAYLOR FUNERAL HOME, 410 Campbell Ave., West Haven on Saturday, August 16 at 11:30 AM. A mass of Christian Burial will be celebrated at 12:00 noon at St. Paul's Roman Catholic Church. Friends may visit with her family on Saturday morning at the funeral home from 9:30-11:30 AM. Interment will be at St. Bernard's Cemetery. Memorial contributions may be sent to the Masonic Charity Foundation, www.masonicare.org/mcf P.O. Box 70, Wallingford, CT 06492.