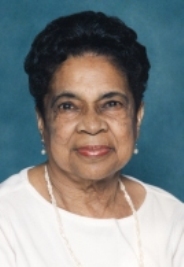 Marguerite Mills McCraven, age 97, died peacefully in the company of her family on Saturday, May 21, 2022 at home in Hamden, Connecticut. She was born on November 2, 1924 in Toledo, Ohio to parents Edward and Kathryn Mills. She married her husband, Marcus McCraven, who predeceased her, in 1947 in Washington, D.C. She was also predeceased by her brother Thomas Mills (Gladys), sister Joyce Thompson (Edward), sister Carol Harris (Joseph), and brother Richard Mills (Ghislaine).
Marguerite loved her family and took a special interest in each and every one of their lives. Marguerite is survived by her three devoted children: Carol Ivy (Jonathan, Sr.) Stephen McCraven (Clemence), and Paul McCraven (Cynthia). Additionally, she leaves behind six cherished grandchildren and three great-grandchildren: Makaya McCraven (Nitasha), Kinga McCraven (Dionne), Jonathan Ivy, Jr., Victoria McCraven, Alexandra McCraven, Jamil McCraven, Maya McCraven, Jaya McCraven and Makani Walker-McCraven. She is also survived by Agnes Zsigmondi McCraven (mother of Makaya and Kinga) and Jessica Benyayer (mother of Jamil), and many other beloved nieces, nephews, and family friends.
Marguerite graduated from Dunbar High School, the first high school to serve African-Americans in the United States. Growing up in D.C., one of her fondest memories was babysitting for Elgin Baylor, who went on to be one of the greatest basketball stars in the NBA. Marguerite went on to study at Virginia State University and graduated with a Bachelor of Arts. Upon graduation, she worked for the U.S. Government, where she met Marcus, and soon they were married. She and Marcus moved to Palo Alto, California where Marguerite quickly became a local community leader within numerous organizations and the church. She was particularly proud to be a Charter Member of the Eta Rho Omega Chapter of Alpha Kappa Alpha Sorority, founded to serve the San Jose area in California.
Moving to Connecticut in the 1960s, Marguerite went on to earn her Masters in Social Work from the University of Connecticut. She was an accomplished professional with positions at the CT Department of Social Services, Gaylord Hospital, Yale-New Haven Hospital, and ultimately retiring from Hamden Public Schools, where she was beloved by students and parents.
Marguerite was an active member of the New Haven Chapter of the Links, Inc., Dixwell Congregational Church, NAACP, and served on the Board of Long Wharf Theater. She was a generous donor supporting numerous organizations, including several Native American causes. Marguerite loved to travel, exploring China, Egypt, Europe, Ghana and several other West African countries. She was a prolific reader, scholar of black history and art, and enjoyed theater and music. She devoted her life to family, friends and social causes to make the world a better place. She was gracious to all and welcomed so many to her home and into her heart. She was truly loved.
Services will be held on Saturday, June 4th at Dixwell Congregational Church, 217 Dixwell Ave., New Haven, CT. Family visitation is from 9-10 a.m. with a service starting at 10 a.m., and burial to follow at Grove Street Cemetery. Following interment, the family welcomes all to a reception at Orchid Café, 5 Science Park, New Haven. In lieu of flowers, you may send gifts of remembrance to Dixwell Congregational Church or the Marcus and Marguerite Scholarship Fund, c/o Quinnipiac University. Arrangements are in care of Beecher & Bennett Funeral Home, 2300 Whitney Ave, Hamden.