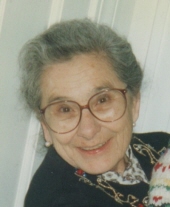 Maria Simonelli Picchio died peacefully at home in Woodbridge on March 5, 2012 after a battle with cancer. She was 90 years old. She is survived by her son Marco Sampoli and his wife, Silvia of Florence, Italy; daughter-in-law Penny Sampoli of Woodbridge, as well as five grandchildren and four great-grandchildren. She was predeceased by another son, Fabio Sampoli, and her husband of over 40 years, Riccardo Picchio. She was born in Florence, Italy on May 16, 1921 to the late Gino and Assunta Cerroti Simonelli. A distinguished scholar in the field of Medieval and Renaissance literature, Professor Simonelli taught at Boston College and in Naples, Italy. She will be remembered by all who knew her for her intelligence and cultivation, as well as for her complete devotion to friends and family. BEECHER & BENNETT, 2300 Whitney Ave, Hamden, in care the private arrangements. Memorial contributions can be made in her name to UNICEF at www.unicef.org.