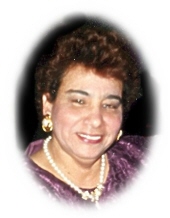 Maria T. Cruz Rivera, 71, of South Willow St., Meriden passed away on Wednesday, March 11, 2009 at MidState Medical Center. She was born February 5, 1938 in SanTurce, Puerto Rico a daughter of the late Octavio and Carmen (Gonzalez) Cruz. She was the center of the family, more than a mother or grandmother and will be deeply missed by all. She is survived by a daughter, Iris Rivera of Meriden, two sons; Dean Rivera of Cape Cod, MA and Wilfredo Rivera of West Haven, three sisters; Elizabeth Acevedo of Meriden, and Jenny Burgos and Ana Troche both of Tampa, FL and three brothers; Eliseo Cruz of New Haven, Octavio Cruz Jr. and Daniel Cruz both of Tampa, FL. Maria also leaves her grandchildren, Lisette Lopez, Ivelisse and Fernando Alvarado, Lauren and Matthew Rivera, Wilfredo Rivera II , Rosalie, Ziomara, Dominic and Gena Marie Rivera, her great-grandchildren, Yasmine Brady, Kevin Brady Jr., Adaliz, Lailani, and Xavier Roman and Deanna and Nicholas Rivera, two very special friends, Nery Diaz and Louise Greene as well as many cousins, nieces and nephews. Relatives and friends may call at the Beecher & Bennett-Flatow Funeral Home, 48 Cook Ave., Meriden on Saturday, March 14 from 1-5pm. A service will be held during this time. Burial will be at the convenience of the family.