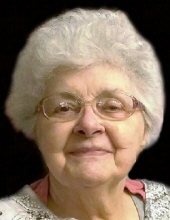 Marian A. Zaugg, 95, of Northford, passed away peacefully on July 22, 2018 at Yale-New Haven Hospital. Born in Rockaway, NY on July 5, 1923, a daughter of the late Joseph and Marie Wiesenhoefer Opelt. She was predeceased by the love of her life, Fred Zaugg. Marian will be remembered by her children and their spouses, Janice & Fred Santa of Northford, Patricia Ullmer of Midland Park, NJ, Jeffrey & Verena Zaugg of Newcastle, ME, and Steven & Karen Zaugg of Stockholm, NJ; grandchildren, Brian Santa & his wife Christine, Travis Santa & his wife Katie, Dominique & Ciara Zaugg, and Sean & Caity Ullmer; great-grandchildren, Ava, Drew, Camryn, Christian, and Noah; and niece and nephew, Vivian Opelt and Robert Zaugg. She was predeceased by her brother, Vincent Opelt. Marian grew up in Hudson County, New Jersey before marrying Fred in 1943. During the war they lived in Delray Beach, Florida before settling in Bergen County, New Jersey, where they raised their children. Marian was a parishioner of St. Luke's Parish in Ho-Ho-Kus, New Jersey for over 40 years. After retiring, Marian and Fred moved to Northford, where they lived with their daughter and son-in-law. During this time she became a Communicant at St. Francis Cabrini Church. While a New Jersey resident, Marian was a member of the American Legion and a Lioness in the Lions Club. Marian's main focus in life was her family. She was a supportive wife, loving mother, caring grandmother, and giving friend. Her beautiful smile will be missed by all. Friends are invited to join Marian's family on Friday, July 27th at 11:30 a.m. for a Mass of Christian Burial in St. Therese Church, 555 Middletown Ave., North Haven followed by her burial in All Saints Cemetery. In lieu of flowers, donations in Marian's name may be made to St. Jude Children's Research Hospital, 501 St. Jude Place, Memphis, TN 38105, the Wounded Warrior Project, P.O. Box 758516, Topeka, KS 66675, or the CT Humane Society,701 Russell Road, Newington CT 06111.