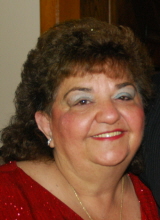 Milford- Marianne E. (Landino) Carrano, 65, wife of Richard Carrano, passed away peacefully on Friday, September 6, 2013 at Golden Hill Healthcare Center in Milford. She was born October 17, 1947 in New Haven a daughter of the late Michael and Mary (Russo) Landino. Marianne attended St. Agnes Church in Milford. In addition to her husband, Richard, she is survived by two sons, Michael Blanchard of Milford and Robert Blanchard of North Carolina, a brother, Joseph Landino of Milford and two sisters; Suzanna Daggs of Milford and Doreen Gravelin and her husband Roy of Waterbury, a grandson, Dylan Blanchard as well as many nieces and nephews. A Mass of Christian burial will be celebrated on Tuesday, September 10, 2013 at 11:30 a.m. at St.Agnes Church, 400 Merwin Ave., Milford. Burial will follow at St.Lawrence Cemetery in West Haven. Relatives and friends may call at the BEECHER & BENNETT TAYLOR Funeral Home, 410 Campbell Ave., West Haven on Tuesday, prior to the service from 8:30-10:30 a.m.