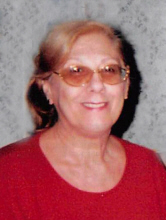 Marie Onofrio, 76, of Meriden, wife of the late Richard Onofrio, passed away on Friday July 17, 2015 after a brief illness. She was born on August 13, 1938 to the late Austin and Phyllis Giannelli. She leaves behind her loving sons, Ricky, John, and Anthony Onofrio, and daughters Sharon Tracy and Ann Kehagioglou. She is also survived by her brother Joseph Giannelli (Cecelia), sisters Phyllis Davis(Joseph), Donna Giannelli (Mike Seeley), and six loving grandchildren. She is pre-deceased by her brother Henry Giannelli. Before moving to Meriden in 2011, Marie was a long time resident of Hamden and then Wallingford. She enjoyed volunteering her time as a member of the Red Hats Society of Meriden but most of all she loved spending time with her loving family and favorite dog Gus. She will be deeply missed by all of her family and friends. Friends are invited to visit with Marie's family on Wednesday July 22, 2015 from 8:30-10am at the BEECHER & BENNETT-FLATOW FUNERAL HOME 48 Cook Ave. Meriden. A memorial service will be held at 10am after the visitation. Interment to follow in All Saints Cemetery, North Haven.