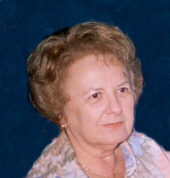 Marie Parcella passed away on December 26, 2010 at CT Hospice of Branford following a brief illness. She was the daughter of the late Nicholas and Lucy Marro Greco. She resided most of her life on Webb Street in Hamden and for the last year and a half lived at Atria Larson Place also of Hamden. She was the widow of Joseph F. Parcella and the sister of Arline Greco who predeceased her only five months ago. Marie was born on August 13, 1934 in New Haven and was employed for 44 years by the Visiting Nurse's Association of New Haven which later became V.N.A. of South Central Connecticut. She held various positions throughout her career and earned the title of Executive Administrative Assistant to the Director and remained in this position for many years until her retirement in August 1996. Marie enjoyed her well-earned retirement with some travel, reading, frequent trips to Foxwoods and being an ardent fan and contributor to then UCONN Women's Basketball Team. She is survived by many cousins which include Carol Julianelle, whom she referred to as her baby sister, Louise Apicella and James Blackie, her in-laws Mary and Richard Parcella and several dear friends, Roberta Rolando, Joanne and Paul Motyl and all her former co-workers from the V.N.A. Her family wishes to extend sincere thanks and appreciation to the staff and caretakers at Atria Larson Place and the CT Hospice of Branford. At Marie's request there will be no calling hours. Friends are invited to attend a Mass of Christian Burial to be celebrated on Thursday, December 30th at 11:00 am, in St. Stephen's Church, 400 Ridge Road, Hamden followed by burial at St. Mary's Cemetery. In lieu of flowers memorial contributions may be made to St. Stephen's Church, 400 Ridge Rd, Hamden, CT 06517 or CT Hospice, 100 Double Beach Rd, Branford, CT 06405 or Atria Larson Place Recreation Department, 1450 Whitney Ave, Hamden, CT 06517 or the V.N.A., One Long Wharf Dr, New Haven, CT 06511. Arrangements in care of BEECHER & BENNETT FUNERAL HOME, 2300 Whitney Ave, Hamden.