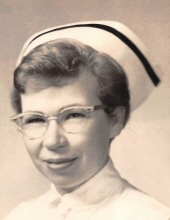 Marilyn Louise Mills Santaus, born June 9, 1934, passed peacefully in her sleep March 14, 2018 at Milford Health Care Center. She was born in St. Johnsbury, VT, the daughter of Bertram and Vivian Mills. She completed her nursing training in 1955 at the Gifford School of Nursing in Randolph, VT. Marilyn moved to New York City, where she worked at Mt. Sinai Hospital. In New York City, she met and later married Edward Santaus, moving to Meriden, CT and becoming a long-time resident there. She worked at former WWII Veteran Memorial Hospital in Meriden, CT, Bradley Memorial Hospital in Southington, CT, and Elim Park Nursing Home in Cheshire, CT during her career. She was a long-time member of Calvary Baptist Church in Meriden, and then at First Baptist Church, also in Meriden. Marilyn was predeceased by her daughter Deborah. She is survived by her daughter, Patricia Baranski of Greenwood, IN, Patty’s husband John, and their children Joshua, Alyssa, and Jessica; her son, Darryl Santaus of Orange, CT, Darryl’s wife Elizabeth, and their children Meredith and Benjamin; her brother, Bertram Mills Jr. of Newport, NH, Bert’s wife Idabelle; her sister-in-law, Diane Trumbull of Enfield, CT, Diane’s husband David; and her nieces and nephews and their children. She was a devoted mother and grandmother and a humble servant in her church communities. Her Graveside Service will be held Monday, March 19, 2018 at 1:30pm at Walnut Grove Cemetery, 817 Old Colony Rd, Meriden, CT. Donations in her memory can be made to Milford Health Care Center, Residents Recreation Fund, 195 Platt St, Milford, CT 06460 because of the attentive care she received from their wonderful staff. Arrangements are in care of Beecher & Bennett Funeral Home, 2300 Whitney Ave, Hamden.