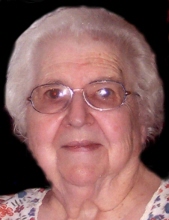 Marion Agnes Spreyer, 84, passed away on Sept. 14, 2008 due to complications of an illness. Marion was born in Albany, NY on Jan. 3, 1924, to the late Charles and Margaret Bird Duke. She spent most of her life living in West Haven where she married and made her home with the late Frank B. Spreyer. Marion leaves her daughter Lynn (Marilyn) Spreyer and sister Eleanor Duke, both of West Haven; her son John (Jack), and daughter in-law Donna and grandchildren Victoria and Jason Spreyer all whom reside in Troy, Michigan. She graduated from Larson College and spent many years as Head Cashier for Merrill Lynch. After her retirement, she served as a lunch aide at the West Haven Senior Center, the Allingtown Senior Center and the Dunbar-Davenport Housing Center of Hamden. Marion was active in the First Congregational Church of West Haven, and also in later years with Dunbar Hill United Church of Christ in Hamden. She was very active in scouting, enjoyed camping, playing cards and mahjong with her friends and creating gifts from plastic canvas. Marion's family would like to thank the staff of Hamden Health Care Center for the compassionate care they gave her during her illness. A funeral service will be held on Wednesday, September 17, at 10 a.m. at BEECHER & BENNETT, 2300 WHITNEY AVE., HAMDEN. Friends may visit at the funeral home Wednesday from 9 - 10 a.m. Burial will take place Thursday at 1:30 p.m. in Beaverdale Memorial Park, Section N in New Haven. Memorial Contributions may be made to the Multiple Myeloma Research Foundation at 383 Main St., 5th Floor, Norwalk, CT 06851.