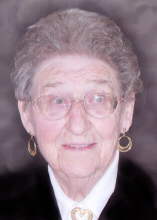 Marion Ruth Salka, wife of the late Robert Louis Salka, passed away peacefully at home on Monday, July 14, 2014 . She was born in Yalesville on February 1, 1918 to the late Edwin B. and Frances R. Yale. Marion attended Yalesville School and Lyman Hall High School and was a longtime member of the First Baptist Church of Wallingford. Marion and Robert were married for 75 years. They enjoyed square dancing, working side by side at Robert Salka Dairy, and raising miniature horses. She is survived by two sons; Robert Salka and his wife Carol, and Ronald Salka and his partner Gerald Swantek, two granddaughters, Deborah Crean and her husband Kevin Crean, and Kimberly Garthwait and Eric Garthwait, four great-grandchildren; Jeremy Smith and his wife Brittany Smith, Connor Crean, Sean Crean, and Megan Crean, and a great-great granddaughter, Autumn Smith. A funeral service will be held on Friday, July 18, 2014 at 11 am at the Beecher & Bennett-Flatow Funeral Home, 48 Cook Ave., Meriden. Burial will follow at Walnut Grove Cemetery. Relatives and friends may call at the funeral home from 9 to 11 am, prior to the service. In lieu of flowers memorial donations may be made to the Meriden Humane Society, 311 Murdock Avenue, Meriden, Connecticut 06450