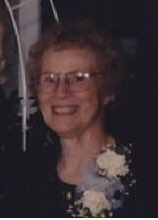 Marion Barbara Collett Upham, 89, formerly of Meriden, wife of the late Kirkland H. Upham, passed away at the Georgeson House in Naples, FL on Sept. 19, 2014. Born in Meriden on Feb. 2, 1925, she was the daughter of the late Arthur G. and Jessie Hobson Collett. She was the beloved mother to daughter Donnalee (Robert) Percope, of Naples, FL, and son William H. Upham, of Meriden. Also survived by a brother, William A. (Charlotte) Collett, of Meriden, three granddaughters; Laura (James) Roblee, of Wallingford, Gina (Craig) Allard, of Naples, FL, and Jillian Upham, of Norfolk, VA, and several nieces and nephews. She had graduated from Meriden High School, and worked as a Teller and Bookkeeper at Meriden Permanent Savings & Loan. She enjoyed gardening and music, and rather than having those who knew her grieve over her loss, she hopes to be remembered fondly with a song or by whistling while you work. All funeral arrangements are private and in care of BEECHER & BENNETT-FLATOW FUNERAL HOME, Meriden. Contributions in her memory can be sent to the Conservancy of Southwest Florida Nature Center, 1495 Smith Preserve Way, Naples, FL, 34102.