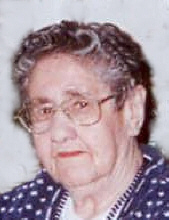 Marjorie F. Howe, 90, of West Haven, wife of the late Francis Howe, passed away on December 20, 2012. She was born in New Haven on April 1, 1922 to the late Walter and Anna Patterson Chase, Sr. Marjorie is survived by her daughter Victoria Petruzzelli of Hamden; sister, Barbara Giaquinto of New Haven; five grandchildren, seven great-grandchildren, four great great-grandchildren; her very good friend, Patrick Burdick. She was predeceased by her sister Mildred Lipka; brothers, Edward and Walter Chase, and Robert MacNeil. Marjorie grew up in New Haven and had lived most recently in West Haven for the last 35 years. For many years she waitressed at Edward Malley's and then worked at Ann Taylor's before retiring. She was an avid reader and enjoyed her TV programs. Friends may visit her family on Thursday, December 27th from 9:00 to 10:00a.m. at BEECHER & BENNETT- TAYLOR FUNERAL HOME, 410 Campbell Ave., West Haven. Her Memorial Service will take place at the funeral home at 10:00 a.m. Followed by an interment in St. Lawrence Cemetery. Contributions in Marjorie's memory may be sent to, St. Jude Children's Research Hospital, 262 Danny Thomas Place, Memphis, TN 38105 or www.stjude.org.