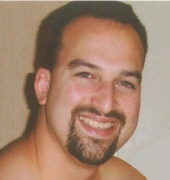 Mark Christopher Chernovetz, 35, beloved husband of Elvira K Chernovetz of North Haven, went to be with our Lord unexpectedly, but peacefully in his sleep on Monday, March 30, 2009. Mark was born March 20, 1974, son of Michael and Pamela Chernovetz. Mark grew up in West Haven with life-long friend Matt Reynolds until moving to Hamden, where his parents still reside. Mark led an active lifestyle, keeping busy with work or helping his family, friends, or neighbors. After graduating from Hamden High school in 1993, where he played basketball, football and ran track, Mark took a job working for UPS. Over the next 10 years, he formed friendships with many co-workers as well as clients on his route. He then accepted a job at Cop-eze in Meriden, where he met his wife and worked there happily, among friends, until his death. Mark loved traveling with his family, and spent his last weekend playing with his children in the many pools and slides at a water park. He had a love for music and movies, and there isn't a movie Mark hadn't seen, often using quotes from his favorite movies in everyday conversation. Above all, Mark was a loving husband, son, brother, and friend and a dedicated father to his children, and provider for his family. He will be greatly missed by all who had the pleasure of knowing him. Besides his wife and parents, Mark is survived by two children, Elvira and Christian, Brother and Sister-in-law, Michael and Jill Chernovetz of Glastonbury, Sisters-in-law Heather Lowenadler, Kristen and Kimberly Zawadowski, all of North Haven, Mother and Father-in-law Elvira and Basilio Scofidio of North Haven and Father-in-law, Henry Zawadowski of Milford. Mark is also survived by Grandparents Gabrielle and Michael of West Haven and Grandmother Eleanor Gates of Jacksonville, FL., 8 Nieces and Nephews, Christina, Christopher, Maggie, Katy, Rebecca, Nicholas, Brayden as well as niece and Goddaughter, Kaylee Rose. Mark was also loved by many aunts, uncles, cousins, co-workers and friends. Friends and family may call at Beecher & Bennett, 2300 Whitney Ave., Hamden on Thursday April 2, from 4:00 - 7:00 p.m. Funeral from Beecher & Bennett on Friday at 9:30 a.m. A Mass of Christian burial will be celebrated in St. Joan of Arc Church, 450 W. Todd Street, Hamden at 10. Interment in All Saints Cemetery, North Haven.