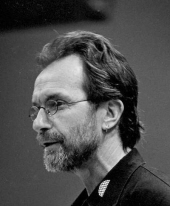 Mark Evan Johnston, 62, passed away peacefully at home surrounded by the love of his family members on Tuesday, November 27, 2007. He leaves behind his loving wife, Betsy Delaney, and four children: Elizabeth K. Johnston (Emanuel Hoskie), Ingrid K. Johnston-Robledo (Richard Robledo), Emily R. Geogerian (Daniel), and Adam M. Johnston (Rachel Caplan), and three step-children: Christian M. Shedd (Melanie), Steven A. Mach and Michelle E. Mach. Mark was a loving grandfather to Jordan Sebastian, Sophia, Roman, and Meren Robledo, Brianna, Noah, Simone, Ahni, and Abel Geogerian. Mark was born on August 22, 1945 in Dayton, OH to the late Hal and Ruth Johnston. He is survived by brothers Lynn Johnston (Jane), Michael Johnston (Lucy), and sisters Diane Collins (John) and Mary Borchers (Karl). Dr. Johnston graduated from Miami University (BA), Clark University (MA), and Yale University (Ph.D) with degrees in English. His life-long love of literature and teaching inspired thousands of students during his 30 years as a professor of English at Quinnipiac University, where he was twice honored with the 'Outstanding Faculty Award for Excellence in Teaching.' Mark was a passionate writer with over 250 poems published, including a collection entitled 'Out Into the End of Time.' He also wrote many scholarly articles and edited three anthologies. Mark extended his love of learning to the community as he led frequent library discussions in Wallingford, Chester, Orange, and Deep River. In addition to teaching, Mark loved spending time with his family and friends who all admire his courage and strength, his generous spirit, and colorful sense of humor. Mark will always be remembered as a kind and loving man. A Memorial Service will be held at BEECHER & BENNETT, 2300 Whitney Ave., Hamden, on Saturday, December 1st at 2 p.m. Friends may visit with the family on Sat. from 12-2 p.m. Memorial contributions in Mark's memory can be sent to the Chester Public Library, 21 West Main Street, Chester, CT 06412. Plans for a Memorial Service to be held at Quinnipiac University will be announced at a future date.