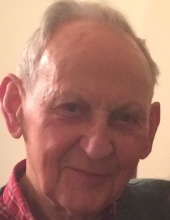 Martin Donohue, 86, of Hamden, CT passed away peacefully with his family by his side at Gaylord Hospital on Sunday, March 29, 2020. Martin was born in Borrisokane, County Tipperary, Ireland on October 30, 1933 to John and Elizabeth (Gaynor) Donohue. Martin immigrated to New York in 1955, where he met and married his wife Mary 'Pat' (Cahalan) Donohue. In 1964, Martin and Pat moved to their new home in Hamden, CT where they raised their three children and built a happy life together. What Martin truly valued in life was family, home and work. He worked as a carpenter at Yale University for 29 years and continued to work independently upon his retirement. Carpentry was both Martin's passion and profession; anyone who knew him, knew he was happiest building in his workshop and sharing his trade with children. He was a man of great integrity, who loved a good conversation with anyone he met. He'll be remembered for his playful spirit and charming personality along with his Irish brogue and mischievous smile. Martin was a member of the IACC, the IHRT and the CTIAHS as well an active member in the Divine Mercy Parish (Saint Rita Church). Martin and Pat were fortunate to be able to travel to Australia, New Zealand, Canada, Mexico and much of both Europe and the US. One of their most cherished trips was bringing their granddaughters back home to Ireland where Martin was able to share his love of Ireland with them. Martin is survived by his beloved wife of 61 years, Pat, his daughters Maureen Donohue of Cambridge, MA and Patricia Fredette (Eric) of West Hartford and their children Kaitlin and Megan who brought him much joy and happiness. In addition, he leaves behind his sisters, Patricia and Ess and his brother Patrick along with a host of relatives in Ireland, England and Canada. He was predeceased by his parents; his son John (2019); his brothers Michael, Eammon, John, and Joseph, and his sisters; Maureen, Kathleen and Agnes. Martin's family would like to thank the staff at Hooker 1, Gaylord Hospital for their exceptional care of Martin during his final days. A private burial was held at St. Mary's Cemetery in Hamden. A Memorial Mass for family and friends will be held at a later date. Donations in Martin's name may be made to the Friends of the Hamden Library or to Gaylord Hospital. Arrangements are in care of BEECHER & BENNETT FUNERAL HOME, 2300 Whitney Ave, Hamden.