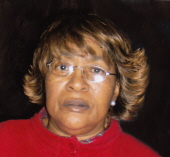 Mary Ann Pouncey, 71, of New Haven passed away June 13, 2013 in the Arden House of Hamden after brief illness. She was born in New Haven, a daughter of the late Odis Pouncey and Inez Jackson and was employed at the New Haven Regional Center for 20 years and later worked with the Patient Care Co. of Mystic. Mrs. Pouncey is survived by her daughters, Stephanie Pouncey, Doreen Pouncey both of Hamden, Antionette (Woodrow) Banks of Culpeper, VA, Jacqueline Pouncey of New Haven and Shay (Michael) Leslie of Hamden, and her special honorary daughter Eileen Spearman of Hamden. Sister of Roberto Pouncey of New Haven, Odis Coleman of Manchester, CT, Peter Fortes of Ansonia, Odessa Fortes of New Haven. She is also survived by 19 grandchildren and 16 great-grandchildren and Cornelieus Sullivan her longtime companion. Mary Ann was predeceased by sisters Adeline Thomas and Delores Dejoya. Her family would like to thank the nursing staff at the Arden House 4 CD for their compassionate care. Funeral service will be private for the family. Arrangements in care of BEECHER & BENNETT, 2300 WHITNEY AVE, HAMDEN.