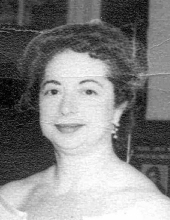 MARY BERNABUCCI Hamden- Mary Bernabucci of Worth Ave., Hamden passed away March 28, 2006 in the Hospital of St. Raphael. She was the daughter of the late Guiseppe and Rosa Belbusti Bernabucci. Mary was predeceased by a brother Dan Berna. She is survived by her brother and his wife Nelson and Louise Bernabucci of Branford and a sister-in-law Marge Berna of Orange. She is also survived by a niece Carol Ann and her husband Paul Gangi and nephews Joseph Bernabucci and his wife Mary and Dan Berna, Jr. and wife Susan. She leaves behind grandnieces Christina, Maria and Jessica, and grandnephews James, Michael and Joseph. Prior to her retirement, she was a civil service secretary with the U.S. Army Air Force at Yale. She was employed at several air bases in the States and served a four year tour of duty in Japan. She also worked at the Pentagon in Washington, D.C. for several years. After retiring from Civil Service, she was an Administrative Assistant at the Blue Mountain Lake Museum in the Adirondack Mountains of New York State. Her last employment was with the accounting firms of Arthur Anderson in Stamford and Deloitte in New Haven. Mass of Christian Burial will be Celebrated in Our Lady of Mount Carmel Church, Hamden, Friday, March 31 at 11 am. There will be no visitation. Interment in St. Lawrence Cemetery. Arrangements in care of BEECHER & BENNETT, 2300 WHITNEY AVE., HAMDEN. In lieu of flowers, contributions in her memory may be sent to the charity of one's choice.