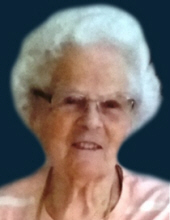 Mary Christine Malick, 95, of Hamden, wife of the late Charles J. Malick, passed away at Connecticut Hospice on Friday, April 17, 2020. Born in New Haven June 23, 1924, she was the daughter of the late John and Ellen Jensen Frederiksen. She is survived by her loving children, Charles (Joanna) Malick Jr. of Indianapolis, IN, Charlene (Michael) Murphy of Branford, John Malick of Branford, Margaret Sommo of North Branford, Elizabeth DiTuri of Cheshire, and Joseph (Carolyn) Malick of Old Saybrook; 9 grandchildren, and 14 great-grandchildren. She is also survived by a sister-in-law, Josephine DeFrancesco of Hamden. After graduating from Larson Junior College, Mary went on to work at the Veterans Administration Hospital in West Haven for 30 years. Upon her retirement, she became actively involved with the Church of the Ascension. She also enjoyed playing the organ, and liked her Bingo. She was dedicated to her family and will be greatly missed. Burial will be held privately. A celebration of Mary's life will take place in August. Memorial contributions may be sent to Connecticut Hospice, 100 Double Beach Rd., Branford, CT 06405.