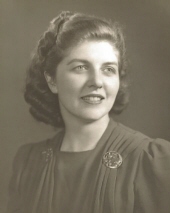 Mary Dalbey nee Rigg was born in Burlington, NJ on 17 May 1916. Her heritage leads directly back to Thomas Jefferson and Mary Dandridge, the sister of Martha Washington. After graduating magna cum laude from Rider College in 1939, she taught High School in Sommerville, NJ for five years. In 1941, Mary earned a Master's in Education from Rutgers University and also married Professor Albert Schaffle. After his untimely death a decade later, she attended Yale University School of Nursing, graduating in 1957. She loved the years she spent nursing and teaching other nurses at Yale. Long after retiring from nursing, she continued to serve as a patient teacher at Yale University's School of Medicine until 2008, contributing to the education of a new generation of doctors. Mary was active in alumni events for the Yale Nursing School class of 1957 for many years. Mary is preceded in death by three husbands whom she cherished equally: Albert Schaffle, James Rendall and Richard Dalbey. Also preceding her in death are her siblings: Frank, Irene, Janet and Mark. She is survived by nephew Bryan Mark Rigg and his family, and her sisters-in-law Doris and Marilee. Also survived by the Bates & Rendall families. Relatives and friends are invited to attend her funeral service on Friday Nov. 18, at 3:30 pm at Grace and St. Peter's Church, 2927 Dixwell Ave., Hamden. Interment in St. Mary Cemetery, NJ. Arrangements in care of BEECHER & BENNETT, 2300 WHITNEY AVE., HAMDEN. In Burlington, NJ Relatives and friends are invited to attend her funeral service on Saturday Nov. 19, at 2:30 pm in St. Mary's Episcopal Church, 145 West Broad St., Burlington, NJ. Interment will follow in St. Mary's Cemetery. Arrangements in care of BEECHER & BENNETT, 2300 WHITNEY AVE., HAMDEN, CT. Memorial contributions may be sent to the American Parkinson Association 135 Parkinson Ave., Staten Island, N.Y. 10305, or to the National Kidney Foundation 30 East 33rd.St., New York, NY 10016.