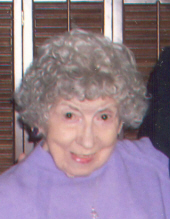 Mary (Dugan) Boucher died on January 10, 2010, just a few days past her 92nd birthday. Mary had been a resident of 19 Cherry Lane, West Haven, since 1957. She was born in New Haven on Jan. 7, 1918, the youngest of 4 children of the late Mary Rebman and Edward Dugan. She married Joseph Boucher on January 15, 1942, and they were married 53 years until his death in 1995. Mary was a 1936 graduate of the 'new' Hamden H.S. During WWII, Mary supported the war effort by working as a coil assembler at Acme Wire. She was a former member of the West Haven Square Dance Club, and until her recent illness was a regular among the walkers 'at the Rock'. At the age of 90, Mary embarked on a big adventure, flying to Texas to spend the winter away from the ice and snow of Connecticut. In Austin, she took her daily walk among deer and other wildlife, and spent afternoons throwing tennis balls for her daughter's retrievers. Unfortunately, her recent illness kept her from repeating the fun. Mary is survived by a daughter, Cindy Nettles (husband Charles) of Austin, TX; a son, Jay Boucher, of West Haven; a granddaughter, Casey Nettles (husband Mitchell Carpenter) of Fort Worth, TX; and a grandson, Cole Nettles of Austin, TX. She was predeceased by her husband, Joe; her sister, Helen Anderson; her two brothers, William and Edward Dugan; and her special friend John Heinz. Funeral Service, Thursday, January 14, 2010 at 11 AM at BEECHER & BENNETT-TAYLOR FUNERAL HOME, 410 Campbell Ave., West Haven. Friends may visit with the family prior to the service from 9-11 AM.