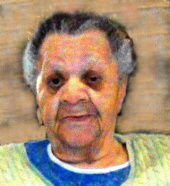 Mary E. Lathrop, age 96, formerly of Dixwell Ave, New Haven, passed away on June 1, 2013. Born in New Haven on Dec. 21, 1916, she was the daughter of the late Phillip & Margaret Sands Lathrop and sister of the late Charles & John Lathrop. Mary is survived by her cousin Pauline Lathrop of Hamden. She was a member of Pocahontas Temple #55 Elks, the New England State Elks, American Legion Aux. Post 200, Ladies Auxiliary of the Charles W. Wood VFW Post 10231, Care Card Club at St. Raphael Hospital and AARP since 1991. Mary was a former waitress at the East Rock Lodge and also did much private domestic work. Friends may gather at BEECHER & BENNETT FUNERAL HOME, 2300 Whitney Ave, Hamden on Thursday, June 6th from 9:00 to 10:00 AM. Her funeral service will begin at 10:00 AM in the funeral home. Mary's interment will be private. Contributions in Mary's memory may be made to the Dixwell Avenue Congregational Church, 217 Dixwell Ave, New Haven, CT 06510.