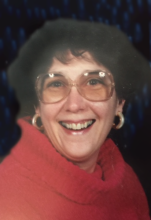 Meriden- Mary Jean Dow, 72, wife of the late George Dow passed away on Wednesday, July 6, 2016 at MidState Medical Center surrounded by her family. She was born April 28, 1944 in Great Neck, NY, a daughter of the late Charles and Emma (Dannenfelser) Bischofsberger. Mary worked for Napier Co. and later retired from Response Insurance Co. She was a lifelong member of South Meriden Trinity United Methodist Church. Mary Jean was a devoted mother and grandmother who took great pride in her family. She is survived by three sons, Chuck (Denise) Dow of West Haven, John (Christie) Dow of Wallingford and David Dow of Meriden, three grandsons, Charlie, Matthew and Zachary Dow, her nephew Steve (Sally) Dow as well as several nieces and nephews in Maine, New York, Virginia and Florida. Relatives and friends may visit with the family on Wednesday, July 13 from 10am-2pm. A funeral service will follow at 2pm. Burial will be private. In lieu of flowers, donations may be made to the American Cancer Society, P.O. Box 22478, Oklahoma City, OK 73123 or www.cancer.org/donate.