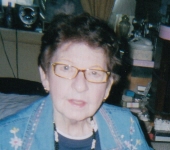 Mary Newcomb, age 81, died on Friday, March 15, 2013 at Midstate Medical Center after a long illness. Born in Fort Kent, Maine she was a resident of Meriden for most of her life. Prior to her retirement she had been a longtime employee of the Southern New England Telephone Company and was active in the Pioneers. She was also a frequent participant in Meriden Adult Education classes and a member of the Meriden Senior Center. She is survived by her daughter Tanya Newcomb of Ansonia, CT and her brother James Clark and his wife Joann of Brewer, Maine as well as numerous cousins and close friends. She was predeceased by her father Edward Clark and by her mother Mae Clark Swift. Friends may visit with her family from 5:00 to 7:00 P.M. on Thursday, April 18, 2013 at the Beecher & Bennett - Flatow Funeral Home, 48 Cook Avenue, Meriden, CT with her Funeral Service to begin at 7:00 P.M. Interment will be private.