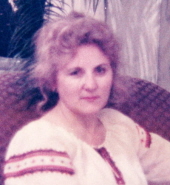 Mary Romaniuk, 78, of Hamden, passed away on January 30, 2015. She was the loving wife of 59 years to the late Theodore 'Roman' Romaniuk. She was born on August 1, 1936 in Peremyshl, Ukraine, and emigrated to the United States in 1951. She was the daughter of the late Stefan and Katherine Havrilchuk Chowanec. She will be fondly remembered by her three sons, Taras (Jackie), of North Haven, Bohdan (Teresa La Forgia), of Glenn Dale, MD, and Yuri (Caroline Phares), of Devon, PA, as well as her two grandsons, Andy and Stefan. Mary was a longtime parishioner and choir member of St. Michael's Ukrainian Catholic Church in New Haven. She was also a member of the Ukrainian Women's Group 'Soyuz Ukrainok.' She had worked at the Sterling Memorial Library at Yale University as a Binding Assistant for more than 30 years. She and her husband Roman were wonderful dancers, both ballroom and Ukrainian folk style. Funeral service from BEECHER & BENNETT, 2300 Whitney Ave., Hamden on Wednesday, February 4th at 9:00 AM. A Mass of Christian Burial will follow at 10:00 AM in St. Michael's Ukrainian Catholic Church. Friends may visit with her family at the funeral home on Tuesday evening from 5:00-7:00 PM, with a Panachyda Service beginning at 7:00. Interment will be held in All Saints Cemetery, North Haven. Contributions in Mary's memory may be sent to St. Michael's Ukrainian Catholic Church, 569 George St., New Haven, CT 06511.