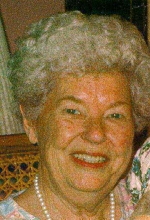 Mary S. Dunn, 88, formerly of 135 Putnam Avenue, Hamden who recently relocated to Conway, South Carolina this past March, passed away on August 11, 2010 after a lengthy illness. She was born in New Haven on March 3, 1922 to the late George and Helen Horan Smith. During her employment years, she worked for the Federal Bureau of Investigation, the Clock Shop in New Haven and was a secretary at several paper companies including International Paper until her retirement in 1987. Mary is survived by her loving family including daughter and son-in-law, Jackie and Cary Meliso of Conway, SC, daughter and son-in-law Margaret and Tim Danton of Hamden, sister, Frances Garrity of FL; grandchildren, Nancy Lacey and husband Tom of Wallingford, David Helton and wife Jill of Plantsville, and Cheryl Danton of Hamden. She will also be greatly missed by her four great grandchildren and many nieces and nephews. Predeceased by her brothers Harold Smith and PFC Parker Smith. Funeral from BEECHER & BENNETT, 2300 Whitney Ave. Hamden, Tuesday, August 17th at 9:30 a.m. A Mass of Christian Burial will be celebrated at St. Rita's Church at 10 a.m. followed by interment in All Saints Cemetery. Friends may visit with the family on Monday evening from 5 to 7 p.m. Contributions in Mary's memory may be sent to the American Lung Association National Headquarters, 1301 Pennsylvania Ave., NW Suit 800, Washington, DC 20004 or American Heart Association, 5 Brookside Drive, Wallingford, CT 06492.