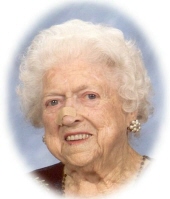 In Madison, Tues. Feb. 27, 2007, Mary Stevens Harris, 95, of Clinton, wife of the late Milton Clark Harris, mother of Mary and her husband, John Wilson of Madison and Cynthia and her husband, Robert Farace of Clinton, seven grandchildren, ten great-grandchildren and 2 step-grandchildren. She was predeceased by a sister, Helen Samrov and a brother, George Stevens. Mary was born in Waterbury, April 13, 1911, a daughter of the late George and Mary B. Fairlie Stevens. She was a member of the First Congregational Church of Christ in Clinton and a lifelong member of the Eastern Star Golden Rod Chapter #34 of West Haven, of which she was also a Past Matron and Mother Advisor. Friends may call Thurs., (TODAY) at BEECHER & BENNETT-TAYLOR Funeral Home, 410 Campbell Ave. at Court St., West Haven from 5-8 p.m. Eastern Star Service at 6:45 p.m. Memorial Service Sat., March 3, 2007 at 10 a.m. at the First Congregational Church of Christ, Rte. 1, Clinton. Burial will be private. In lieu of flowers, memorial contributions can be made to the North Madison Vol. Fire Dept., 864 Opening Hill Rd., Madison, CT 06443 or to the Clinton Vol. Fire Dept., memo - Ambulance Division, 35 East Main St., Clinton, CT 06413.