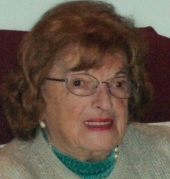 Mary V. Malavasi, 93, entered into eternal rest on August 29, 2013 at Masonicare in Wallingford. She was the loving wife of Ernest Malavasi. Born in Cambridge, MA on September 29, 1919, daughter of Selma and Salvatore Valente. She was a long time resident of New Haven and a member of St. Aedan's Parish until her illness. She was employed at A.C. Gilbert before her marriage and worked at the Edw. Malley Co. She leaves behind three children, Joanne (Frank) Quinto and Carole Mendygral of North Haven and Ernest (Maryjane) Malavasi of East Haddam. Also surviving are five grandchildren, Missy (Frank) Orosz, Kerri (Richard) Cannavaro, Amanda (Christian) Pipenbacher, Steven (Jacqueline) Mendygral and Scott (Kristy) Quinto and two step-grandsons, Peter and Joseph Plude. There are also 4 great-granddaughters. She is the sister of Regina Locke, Santina Voulo and Raffelina Russo. All will miss her greatly. She was predeceased by a son-in-law, Stanley Mendygral. Mary loved to play Bingo and card games with her many friends. She enjoyed dancing on Saturday night with her husband and making holiday dinners, usually her famous lasagna. She was an avid NY Yankee fan and enjoyed watching UCONN Girls Basketball. A Mass of Christian Burial will be celebrated on Tuesday, September 3, 2013 at 11:00 AM at St. Aedan's Church, 112 Fountain St, New Haven. Burial in Beaverdale Memorial Park will follow. Family and friends may pay their respects Monday from 5-7:00 PM and Tuesday morning from 9:30 to 10:30 AM at BEECHER & BENNETT, 2300 Whitney Ave, Hamden. In lieu of flowers, a donation may be made to Masonicare Home Health & Hospice, c/o The Masonic Charity Foundation of CT, 74 Cheshire Rd, P.O. Box 70, Wallingford, CT 06492. To donate online visit, www.masonicare.org/mef and click on the 'Donate Now' link.