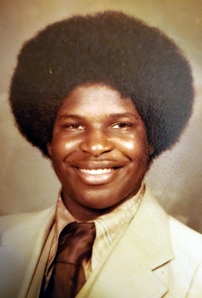 Michael Allen Batts was born June 11, 1961 in New Haven, CT to our loving mother, Mary Green, and Richard Batts. We lived in New Haven briefly and moved to Hamden when Michael entered 5th grade. Little did he know he would meet his lifelong friends there. Michael taught himself to play the bass guitar in middle school; and attended the New Haven School of Music. Along with David, Paul, Parker, Kent, Raymond, Brian, and others they formed the band “The Bleechers.” This was their practice location each Saturday behind the dugout at Rochford Field, encompassed with pine trees that withstood the P-Funk influenced music, members with instruments. We will never forget the spaceship, platform shoes and diapers worn at their shows!
After High School, Michael had no interest in college. He knew he was meant to be a musician! He worked for Blue Cross/Blue Shield, where he remained employed for 29 years. In his spare time, he found a second love, working at the famous Toad’s Place. Here, he would meet legendary musicians, form lasting friendships, and receive inspiration. Michael toured with The Sons of Funk band, formed by the drummer of Parliament. He and David met their idols, George Clinton and Larry Graham, in their travels nationwide.
Michael was quiet, but was also kind, caring and funny as heck. Many friends and family members obtained their nicknames from Michael. He was hilarious! Anyone who knew him, loved him.
Michael was predeceased by his father, Richard Batts. He is survived by our mother, Mary J. Green, sisters, Cheryl Carter (Greg) and Christine, brother, Paul Jackson (Shelley), daughter, Yvonne (Erin), and grandson Erian, along with his former wife, Linda Kendall, and their children Alisha, Erica and Khadijia. There are too many more aunts, uncles, cousins, nieces, nephews and grandchildren to name.
We know Michael had a relationship with The Lord and is Resting in God’s arms forever!
Friends and relatives are invited to visit with Michael’s family from 9-11 a.m. Monday, November 28th, 2022 in Beecher & Bennett Funeral Home, 2300 Whitney Ave., Hamden. Funeral service will begin at 11 a.m. Burial will follow in Evergreen Cemetery.