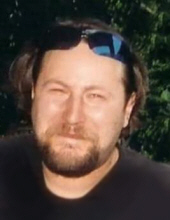 Michael C. Hodgkins, 45, of West Haven passed away suddenly on Sunday, June 9, 2019. Born in New Haven May 28, 1974, he was the son of Curtis and Diane (Paulsen) Hodgkins. In addition to his parents, he is survived by his sisters, Tracy (Thomas) Henri, Jamie (Todd) Cox, and Jennifer (Daniel) Seiden; his companion Gina (Marie) Saccavino; nephew and nieces, Nicholas Wheaton and Tiffany Wheaton, Amanda Chamberlain, Emily Lagerberg-Desrosiers, and Kennedy Seiden; and eight great-nieces; as well as numerous aunts, uncles, cousins, friends and extended family in Florida, Missouri and New Hampshire. A resident of West Haven for most of his life; he was a graduate of West Haven High School's class of 1992. He had been employed through FedEx for several years; and currently was an employee of Kraine X-Press. Michael's primary interest was maintaining his notable memorabilia collection of G.I. Joe, Star Wars and Transformer action figures, just to mention a few. His love of memorabilia inspired him to create the CT Action Figure Collectors Club, allowing him to share his passion with others around him and earning him the nickname 'Transformer Mike.' Michael was also a member of many online consortiums of collectable memorabilia, worldwide. Friends are invited to visit with Michael's family on Wednesday, June 19th from 6:00 to 9:00 p.m. at PORTO FUNERAL HOME, 830 Jones Hill Rd., West Haven. A Prayer Service will be held in the funeral home during this time. Burial will be private. To honor Michael's memory, please consider making a donation to The Wildcat Sanctuary at www.wildcatsanctuary.org, the American Heart Association at www.heart.org, or to your local no-kill animal shelter. Arrangements are in care of Beecher & Bennett Funeral Home.