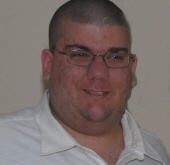 Michael D. Blanchard, 39, passed away unexpectedly on Monday, January 12, 2015. He was born August 21, 1975 in Milford, a son of Robert Blanchard of Texas and the late Marianne Landino Carrano. He was a hard worker and a very loving, caring, all-around 'good guy.' In addition to his father he is survived by a brother, Robert Blanchard Jr. of Kansas, a nephew, Dylan Blanchard of Kansas, an uncle, Joseph Landino of Milford, and two aunts, Suzanna Daggs of Milford and Doreen Gravelin of Waterbury, as well as many cousins. A Mass of Christian Burial will be celebrated on Thursday, January 22, 2015 at 11 am at St. Agnes Church, 400 Merwin Ave., Milford. Burial will follow at St. Lawrence Cemetery in West Haven. There will be no calling hours. The Beecher & Bennett-Flatow Funeral Home, 48 Cook Ave., Meriden has been entrusted with the arrangements.